Interview with a Rabbit

Today we're chatting with Tyrabbisaurus Rex of elementary school fame. Rex is a pet in an unidentified classroom somewhere in the United States.

AJ: Right. Thank you for joining us, Rex. Can you tell us exactly where you live? My readers are quite curious.

TR: Top secret, ma'am. It's a classroom. That's all you need to know.

AJ: Hm. All right. Well, as I understand it, you're not exactly happy in this classroom. Wanting to escape maybe?

TR: It's because the humans just aren't that smart. I manage to escape on a very regular basis, at least from that humiliating, three-level condo-cage they like to put me in. And the classroom is filled with computers, iPods and iPads. Seriously. It's a technological paradise in here. I could probably rule the world from this classroom if I wanted to.

AJ: All right. So if you've managed to escape the cage, why are you still in the classroom?

TR: Can't reach the doorknob. I know. It's sad.

TR: Don't worry though. I'll escape eventually. Actually made it out once.

AJ: You did? What happened?

TR: Don't want to talk about it. Tricky humans.

AJ: Okay, so. You're living in a classroom somewhere in the United States.

AJ: Any other plans once you've managed to escape?

TR: No, the dinosaur world.

TR: I know, I know. They're huge and dangerous. But I am Tyrabbisaurus Rex, the fiercest of all dinosaurs.

TR: Destined to rule the rest of my kind.

TR: Destined to take control of the T-Rex Council, to lead all my kind to freedom from oppression as classroom pets.

AJ: But you said it yourself - you're very small.

AJ: Well, I haven't met you in person, but I'm pretty sure from the photo on your twitter feed that you're a rabbi-

AJ: Right. And after you escape?

AJ: Of course.  So, um, after you free the dinosaurs, then what?

AJ: Well. That should be very - interesting. Thank you, T-Rab, for chatting with us today, and - um - good luck with your escape plans and - er - quest to free the dinosaurs and achieve world domination.

TR: Thank you, A.J. I'll get back to my veggies now. Nom-nom-nom. Bye now. Chomp-chomp-chomp.

His book, Tyrabbisaurus Rex, is now available on Amazon. 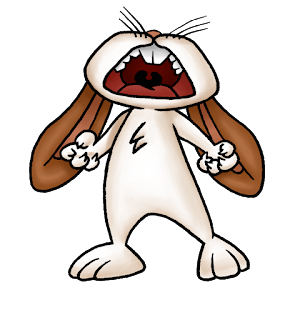