I'm super excited to participate in this anthology's blog tour. I think I've been in love with it since I first saw the book cover. I know they say never judge a book by its cover, but how can you not with this amazing artwork? It was an insta-buy for me and I definitely do not regret that choice! 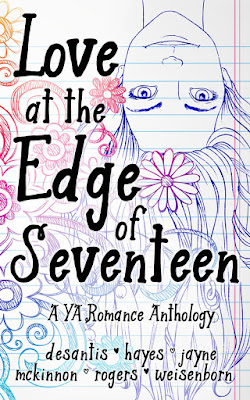 Love at the Edge of Seventeen

A YA Romance Anthology

from Stars and Stone Books

It's never easy to go through the fraught transition into adulthood,
but the teens in this anthology have more to deal with than most: super powers, magic, illness, prejudice against sexual orientation and gender identity, and even death.
Fortunately, they all find love at the edge of seventeen.
Featuring:

Kindle | iBooks | Nook | Kobo | Google Play
For our blog tour, we asked our authors to talk about the creative process for their stories. How did they come up with the theme or idea for their story? The title? Did anything help the process (like a song or other story?)

I originally wrote this story for a call wanting the real lives of superheroes. The original version was not a romance. In fact, it didn’t even have a happy ending. I’d been thinking about revising that version for a while when this came up. I  had the whole prom angle in there already and thought “why not make it a romance involving prom?” Many edits and a lot of snarling later, “Unfixable” became “Be Null, My Heart,” and I vowed never to rework a story so drastically again…til next time.

I love titles with puns. There are nulls, people who null superpowers, in my story. Combine that with the whole “be still, my heart” fluttery heart going still idea present in romance, and ta-da—a pun title that’s sort of relevant to the genre.

Honestly, I needed absolute silence for this one. The amount of revising I did to turn this from a bad ending to a romance required all my concentration. I’d be in the middle of editing. My poor boyfriend would ask me a question, and all bets were off.

To be honest, it was something I had recently lived through, and I wanted to spread awareness of a rare disease. I wasn’t as young as my main characters when I was diagnosed and went through my treatments, but since the medical situation had just occurred, I felt compelled to share it, fictionally, with others.

If I talked about how I came up with the title, I’d give away part of the story that is actually important, so—you’ll have to read it to find out!

There wasn’t anything that helped me get into the writing, to be honest. This story came to me in a flash. That doesn’t always happen, but it’s nice when it does. I wrote it out in a day, and then, went back over the course of a week to really put the pieces together and edit it. If I felt like I needed more information or feeling, I thought back to my own experiences with the situation in my book—for instance, what ARE all those tubes in the ICU called? What features would this disease present? What, even, did the air feel like in the hospital? Memory is a powerful force, and even if you don’t have all of it to rely on, what you can use serves a wonderful and useful purpose.

The idea for the story came to me when a friend of mine explained how stepping into a hole his dog had dug caused him to seriously injure his foot. Somehow that small seed grew into Xander’s klutziness. Originally Xander’s injury took place off camera, but as I laid out the story in my head, having him get injured during the course of the story made more sense.

“Dead Man’s Party” seemed like the perfect title for a story about young love and zombies.

“Dead Man’s Party” is my first YA story. Reading a ton of excellent YA novels helped me get into the mood to explore the genre. My friends give me the best book recommendations.

My initial idea was to write a story about a fat girl who gets the hot guy. But as I started pulling elements from my high school experience to add to the story, I realized that my story was missing something. One of my best friends from high school is AFAM (assigned female at birth), nonbinary, generally presenting male. I have several other friends who are trans. And the more I thought about it, the more I wanted to include a trans character—not as a best friend, but as a romantic lead. Because everyone deserves a happy ending.

I didn’t have a title for ages. First it was just called “YA Story.” Then it was “It Takes Three,” although I knew that wasn’t a permanent title. Then, at the end of one of Noah’s chapters, he said that it felt like his heart was being ripped into three jagged pieces. Suddenly I had a title. (Although other 90s kids have told me it sounds a little bit like Alanis Morrisette’s “Jagged Little Pill”).

To get into the writing headspace for this, I put on the playlist I made particularly for this story. I described some of the songs for the soundtrack part of our author interviews (click here for the anthology's soundtrack and here for the playlist on Spotify). Usually I write to movie scores or other “big emotion” orchestral pieces, like songs by the group Two Steps from Hell. But this time, I made a playlist of music no older than 2000 (when my characters would have been born). Most of it is pop music, some of it is from musicals, and then there are a few score pieces on there to break up the vocals. It really helped me to get out of my own head a little and into the world of a modern teenager, since most of the pop songs weren’t things I would listen to normally.

How I got my theme is of great importance to me. One of my daughters is queer, and one of my sons is gay. I want. Check that. I need to be making sure that my characters represent good, decent, honest, and wonderful, fully formed characters who are of all kinds, and to give them agency, and depth, and never let them be stereotyped. I needed to be fair to everyone and show these people for what they are. People. Just… people.

I had help with my title! All I could do was read and re-read, and come up with the title of the book. That certainly wouldn’t do! I have to thank someone else for finding the other thread so well!
What helped me get in the mood for writing is my Alexa (“Alexa—play 80’s music.” Or “Alexa—play classical music.”) When I needed a break the weather, or the news, etc… All without leaving my keyboard. Also—good weather sent me out on the front porch, sometimes in bed, sometimes in my office, sometimes in my living room. I like to change it up. Of course, tea. There is no life without tea.

Kylie Weisenborn, “Now I Am”

I first came up with this story several years ago when I was in undergrad for creative writing. I thought there was something so romantic about a southern romance, yet I wanted a kind of quirky ghost character. The theme kind of wrote itself. My first draft was a bit morbid (Carter was a human and died in the story), but I felt like him being a ghost worked out better.

I think mine is pretty self-explanatory after reading the story, but Annalyn wasn’t ready to move on before Carter came into the picture, and now she is. Hence, “Now I Am.”

I love Charlaine Harris’ Sookie Stackhouse series, so I would sometimes watch clips from True Blood to get into the dark Southern, supernatural mood for writing. 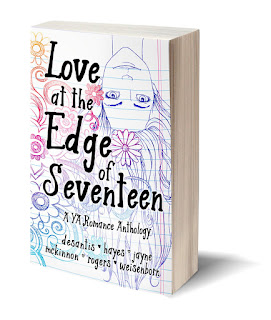