From Feral to Friendly

Remember my hope that Buffy would one day allow me to pet her?  Well, it's happened!  Over the past week, she's been doing that circling around thing that Skittles always does.  She circles right in front of me or to the side and rubs up against everything in her vicinity.  I know what she wants because it's what Skittles wants in those moments. The problem is neither cat is certain I can be trusted to give them exactly what they want (and that I'll let them go once I've given it to them), so they make me work for it.

I have to be calm and coaxing without pleading and yes, I have to be faster than the kitty.  Sometimes Buffy won't let me touch her at all (like I said - just like Skittles).  And sometimes she'll only let me reach under the feeder where she hangs out and pet the top of her head or scratch under her chin (this is a much more comfortable arrangement than the one Skittles initiated with me several months ago).

Today though was an amazing day.

Today, Buffy let me pick her up and hold her.  I honestly cannot believe how different she was when I grabbed her this time.  I expected to get scratched and bit again for my troubles, but instead, the minute I caught her, she started to purr - just like Skittles!  Of course, I couldn't hold her for very long, but long enough to warm my heart ... and to take a selfie. 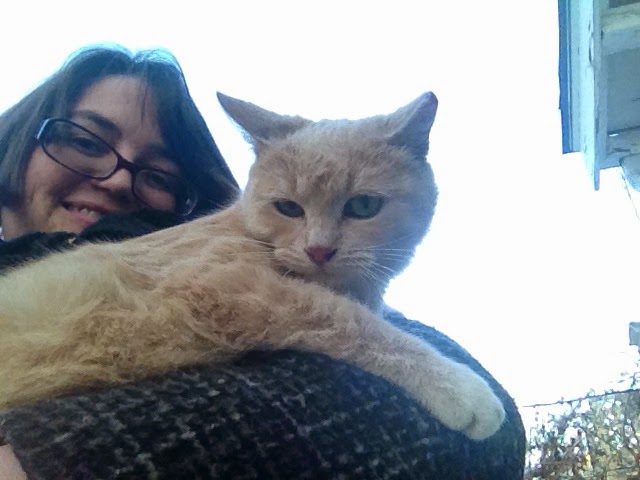 Of course, Buffy wasn't quite sure what to make of the photo op and moments after this photo was taken, she became a bit restless.  I made it a point to carefully set her down on the ground, rather than allowing her to escape.  I wanted her to start trusting that I would always let her go after holding her.  Biggest success?  After releasing her, she didn't run away, but instead happily began to eat her dinner.
Posted by A.J. Culey at 9:00 PM