Skittles has identified one specific spot in the house where she will allow petting to occur.  Any petting outside this zone is strictly prohibited (though I have been known upon occasion to break these rules).

Of course, the area she has chosen is perhaps the most annoying one in my entire household, as it happens to be any spot within arm’s length of the toilet IF I am seated upon it.  She’s figured out this is a place of vulnerability for me.  I will not move quickly from this spot, which gives her ample opportunity to flee if she perceives an attempt to pick her up is imminent.

She loves being pet and will purr ferociously when I stroke between her ears or beneath her chin, but in the perverse nature of all cats everywhere, she is unwilling to endure that which she loves unless it is on her own terms.  Thus, when I’m on the toilet, no matter where she was in the house when I headed for the bathroom, Skittles will always show up.

She enjoys pacing in a large circle at my side, moving from almost close enough to snatch up to outside arm’s length.  She loves for me to catch her tail in a gentle hold at its base and then allow it to slide from my grasp as she circles away.  As the tip of her tail escapes my hand, she invariably circles back, tilting her chin toward me, inviting me to stroke her there as well. She’ll stand still for a few seconds, allowing me to pet and stroke her head and chin, then will slowly move beneath my hand until her tail is once more within my reach and the cycle begins again.

We’ll repeat this strange ritual multiple times until her need for contact has been appeased and she strolls leisurely away.

Over time, she has circled closer and closer and lingered longer and longer, for more extensive petting.  Over time, she has even occasionally ventured close enough for me to snatch her up and hold her in my arms.  In the early days, her claws would immediately extend and she would struggle to escape. I would use towels to capture her when I could, just to protect myself from though wayward claws. Though I should mention that her struggles were never aggressive in nature. She was struggling to get down, but not attacking me. Any scratches I received were purely inadvertent results of her desire to escape.  In later months, towels and blankets were no longer needed for protection.  Instead, she would simply freeze upon capture, claws fully sheathed. It would take long moments of constant stroking and attention for her to begin purring again.

Now, after many months of negotiating how and when she’ll be pet and held, I’m finally able to sit upon the closed toilet to engage in our petting ritual.  And though she still tries to flee when sensing imminent capture, Skittles now purrs the moment that capture becomes fact.

And because I must work so very hard for her affection and her time, Skittles’ every purr, every head butt, every tail slide brightens and enriches my world.

As we continue negotiating the parameters of our relationship, I slide ever deeper into love. 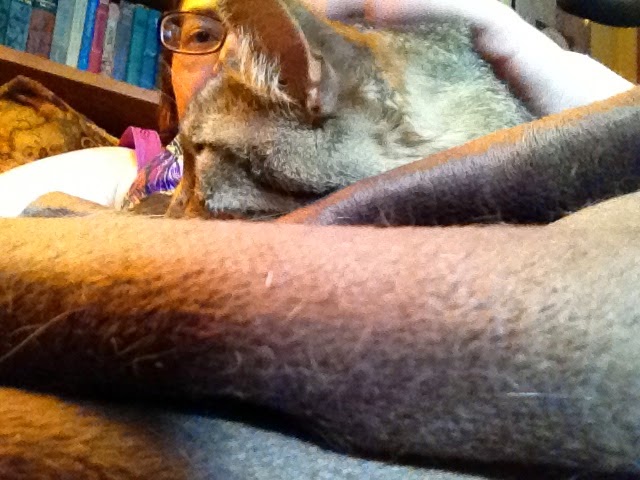 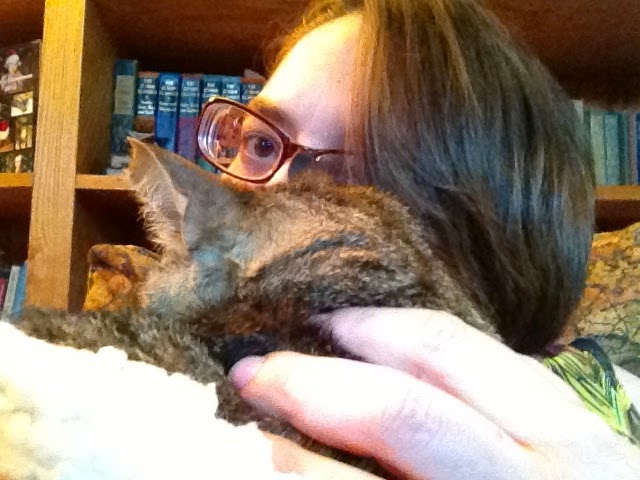