Well, I have survived my first week in Argentina and what a week it has been!  I feel like I have been here a month (or more) so much has happened.  First, the trip here was unbelievably long.  We were delayed leaving Kansas City by several hours (due to the threat of thunderstorms) and were concerned we were going to miss our flight to Buenos Aires as a result.  Luckily, the flight to Buenos Aires was also delayed (as we arrived in Atlanta, Georgia a full forty minutes AFTER our international flight was scheduled to depart).  Once we boarded the plane in Atlanta, we waited so long to take off we had to return to the terminal to be refueled.  Then we had the lovely overnight ten hour flight from hell.  Once we arrived in Buenos Aires, we were forced to circle the airport for almost an hour due to fog in the city.  We finally landed, gathered our luggage, went through customs, and immediately caught a bus for a twelve hour trip to the interior of the country.  To give you an idea of how long we had been traveling, I left my house in Kansas City at noon on Thursday afternoon.  We did not arrive in Villa Maria until 10:30 Friday night.  We were utterly and completely exhausted by then.

My host family greeted me at the bus stop.  They are a family of four - Leticia (or Leti) the mom, Eduardo (or Edu) the dad, Leila who is 12 and Elin who is 9.  I was so excited to be placed in a family with children again (children always make the experience so much more enjoyable) and they are truly a lovely family.  Leticia and Eduardo have gone out of their way to make the most wonderful vegetarian meals for me - they have made the most unbelievable vegetable tartas (the best I can compare them to is a vegetable pie, some like a pot pie and some more like a pizza).  And speaking of pizza, Eduardo has made some incredible vegetable pizzas.  Not to mention the salads and postres (desserts that are absolutely to die for).  I'm eating VERY well here, most definitely better than I eat at home.

The girls are thrilled with the gifts I brought for them - the three Sandra Boynton CD/book collections from Kohl's.  This is a very musical family, so the gift was very much appreciated.  Leila has already learned the words to one of the songs from Dog Train AND has learned to play it on the piano as well (as the music scores are included at the back of each book).

As for my experiences in Villa Maria, we have been on the go from the day we arrived, visiting schools, speaking with students and teachers, and attending lectures.  All of the schools have welcomed us with open arms, usually offering providing some form of refreshments and often giving us a gift as well.  Today we visited a vocational school (a lecheria where students participate in processing of dairy products) and were given a gift bag with a block of goat cheese and a jar of dulce de leche (a sweet caramel-like substance that is found in many of their desserts). 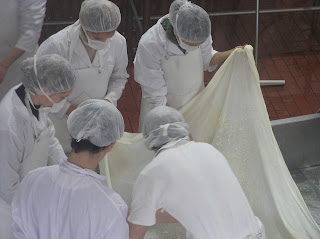 And what is Argentina like you might be asking (seeing as I'm rambling about food and schools, but am not really saying anything of particular interest).  Well, first and foremost, Argentina is currently very COLD.  It seems even colder due to the lack of central heating.  Some of you may be thinking that I'm probably exaggerating since I hate the cold, but trust me, when they said winter, they meant winter.  Luckily, Leticia had an extra winter coat she was able to loan me, because otherwise, I'd be utterly miserable.  Of course, my body is having a riot trying to understand why it went from summer to winter so quickly and I have a terrible cold to go with the wacky change in seasons.

What else can I tell you about my experiences here?  The people here in Villa Maria are by far some of the kindest people I have met anywhere.  When you enter their store or restaurant or business, they are thrilled to greet you.  They welcome you with a kindness that never feels artificial and are willing to spend as much time with you as needed, patiently wading through our sometimes limited Spanish.  I can also say most sincerely that all of the people here on this trip with me are wonderful.  Everyone is so concerned about everyone else, sharing medicine and ideas and clothing so that each person has what he or she needs.

Of course, things here are not perfect.  Life in Argentina moves along at its own pace.  No one is in a hurry; things happen when they happen.  I've visited a local travel agency every day for four days in a row, trying to arrange hostel stays in Buenos Aires and Foz do Iguacu, and each day, after a lovely, meandering conversation about everything we can possibly think of, all of it in Spanish; Mariana tells me that she is still waiting to hear from the hostel in Buenos Aires, is working on arrangements for Iguacu, and should have more information for me the next day.  And so I return the following day, to indulge in another lovely conversation and to receive the same information again.

It's impossible to become upset because Mariana is so kind and because she is doing the best she can, waiting on others to respond to her attempts to contact them, etc.  It is quite simply a different pace and in most aspects, it's very nice not to be rushed and stressed and watching the clock all the time.  On the other hand, when it's freezing out and all I want to do is buy a warmer pair of socks, but can't because all the shops are closed for siesta (which lasts four HOURS), I have to wonder which is better - the laidback, relaxed society where I can't buy a pair of socks to save my life, or the extremely time-conscious society that will have me popping pills for stress before the age of 40 but with a hundred pairs of socks all neatly arranged in my dresser drawers.

I've also had to get used to the whole no seatbelt thing again.  I honestly don't know which is worse -  sitting in the front seat of a remis, seatbelt securely fastened but with a birds eye view of the insanity of Argentine drivers or sitting in the backseat where no seatbelts can be found at all, but a little further away from the disaster of a cab driver.  Either way, your life typically flashes before your eyes while you hold on for dear life.

I have almost had a heart attack more than once as our remis barrels through an intersection at top speed (apparently the government of Argentina has decided that stop signs and stop lights are unnecessary expenses and instead chooses to rely on the fast reflexes of its insane citizens).  Indeed, there are very few stop lights to be found anywhere and I have yet to see a stop sign at all.  Most intersections are considered a free-for-all, so as cars approach the intersection, an interesting sort of dance occurs.  Whoever reaches the intersection first gets the dubious pleasure of barreling on through.  Whoever arrives in second place taps the brakes enough to skate through the intersection at a slightly slower speed than that of a rocket, narrowly missing the bumper of the first vehicle.  Individuals riding bikes and motorcycles tend to hurtle through these intersections as well, showing little regard for their own safety.  I have been disturbed on numerous occasions by the sight of a child sandwiched between its parents on the back of a motorcycle (I wouldn't take a child for a ride on a motorcycle in the middle of the country with only cows around to get in my way, let alone in the middle of an Argentine city populated by kindness and crazy driving). 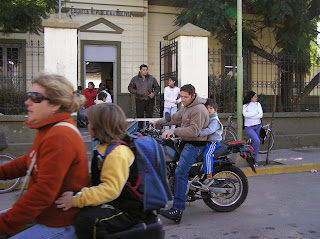 And let's just say that pedestrians are taking their lives into their own hands when choosing to cross a street.  In Argentina it might be better to choose a particular turn to make and stick to it (i.e., when leaving the house, take a right and continue taking rights at every intersection, thus negating the necessity to ever cross a street.  Sure you'll probably end up walking in circles, but it beats getting hit by a car!)

I am certain there is much more to share about my first week in Argentina - like being interviewed by a local newspaper and quite innocently stating that we were here to have fun, and to learn about the culture and history of Argentina.  This seemed an honest statement to me, but divertirnos (to have fun) in Spanish apparently gave the impression that we were party chicas and only here for the quilmes (local beer).

In any case, it is time to wrap this up as I have a 7:30 a.m. bus to catch headed for Cordoba, and I need to get some sleep before then.  So let me just end by saying that:

Email ThisBlogThis!Share to TwitterShare to FacebookShare to Pinterest
Labels: Travel